“They would not let me go until they had fed me!” 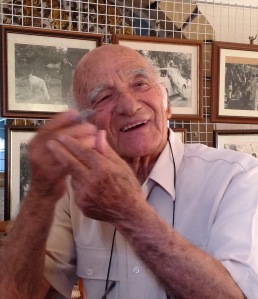 While in Polis Chrysochous on 17 June 2015 I visited a man named Christodoulos, a school teacher who was born in 1929.

The day that he finished primary school his teacher came to his house. Christodoulos’s father Yiannis thought that he was in trouble but the teacher said “No! He is my best pupil and I want him to continue his studies.” Yiannis knew nothing of what was required; he could not guide his son. He told the teacher, “OK, he is in your hands.” The teacher put Christodoulos on the back of his motorbike, took him to a bookshop and bought him some books and then enrolled him in high school. This was the turning point in Christodoulos’s life, to which he attributes all of his later success.

Christodoulos would work on his father’s farm during school holidays and sell the produce to many Turkish Cypriots. “They would not let me go until they had fed me”, he said. They adored his father and would drive to his house, pick him up and take him to their parties and then drive him back home.

After he finished high school, Christodoulos studied in Leeds in the UK on a scholarship. He then returned to Cyprus to attend two years of teacher’s training college in Larnaca, where he shared a room with two Turkish Cypriots. They became best friends. During the troubles in the lead-up to the 1974 Turkish military invasion, Christodoulos was filling his car up with petrol in Morphou when he heard a familiar voice. It was one of his Turkish Cypriot friends from teacher’s college. They were so excited to see each other and went to embrace – but his friend signalled restraint; Turkish soldiers were nearby and they could be seen.

Christodoulos seated to the left while he was at teacher’s training college, with his Turkish Cypriot classmates

There are many more stories to be told of Christodoulos’s life; he is an engaging storyteller and a man of deep wisdom. Fortunately, his granddaughter is currently writing his biography (I will post a link when it is available!)

On 19 June 2015, I met Nikos at a café on Ledra street (the main shopping strip in old Nicosia), near the border.

He handed me some papers that he had photocopied – they were hand-written recollections of his Turkish Cypriot friends with whom he grew up.

Nikos’ father spoke fluent Turkish and as a child Nikos wanted to learn also. His father’s Turkish Cypriot friend would teach Nikos Turkish in the municipality office until an EOKA commander did not allow him to learn Turkish any more.

Nikos and I during the interview

Since the border opened in 2003, Nikos visits the north one or twice a year to visit his father’s old Turkish Cypriot friend.